“If we don’t help kids survive, where is the world going?” Dina Bourdakos, Kat’s mom 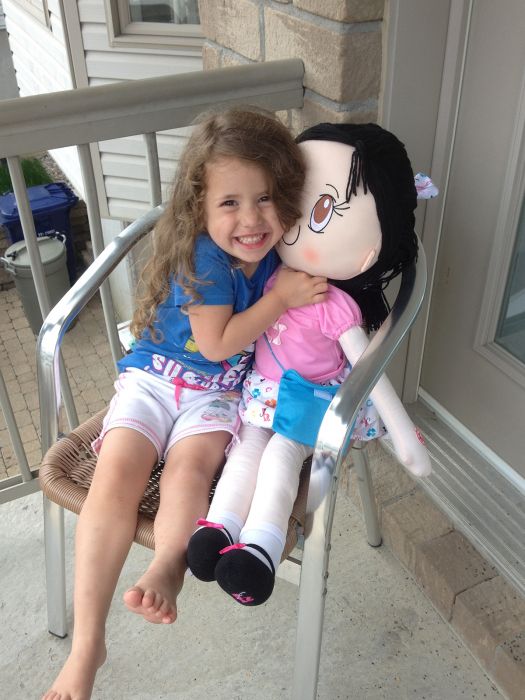 It all began with a lazy eye. Young Catherine “Kat” Demes had to sometimes turn her head slightly sideways to be able to look straight at people. Maybe she only needed prescription glasses. That is why her mother Dina took her to an ophthalmologist. A mother knows best, right? What Dina didn’t know was that her sweet little 4-year-old girl had just begun a very difficult medical journey.

After pointless visits to ophthalmologists and pediatricians, one specialist stood out: Dr. Wise, an elderly man in Sherbrooke. “Will this doctor be able to help our child,” wondered Dina and her husband Peter. He did. Kat’s head needed to be examined, not her eyes, he told them. They wondered how a simple eye problem could turn into such a medical mystery. They took Kat to the Montreal Children’s Hospital for an MRI.

The diagnosis hit like a bombshell. Kat had Diffuse Intrinsic Pontine Glioma (DIPG), an inoperable tumour with a median survival rate under 12 months. As the doctors spoke to her and her husband, Dina could barely hear the words. Brain tumor. Inoperable. Radiation. She could not bear the truth. How could she? Her baby was going to die!

A lazy eye was now a question of life and death. Radiation treatments began. 30 sessions. Harsh on the body of a young and helpless child. But Kat never complained. Only once did she ask a question. It was a question that would break any mother’s heart. When her mouth started to be crooked, she asked “Mommy, when will my smile be straight again?” Dina stayed strong: “Your smile is perfect, my beautiful sunshine.”

The following weeks felt like a rollercoaster. Kat lost her ability to talk and walk. But a few months later, she began to seem like her old self. Good news: the tumor had shrunk! The family even went on a vacation – her Make A Wish vacation to Disney. Kat, her brother Christopher, daddy and mommy along with Kat’s aunt Voula (who Kat begged to come along): just like in the old days! Kat was having a blast.

But real life soon caught up and the tumour began to grow. Kat spent the last weeks of her young life laying and sleeping on the family sofa. She did not want her parents to carry her to her bed. She was in too much pain. Yet, despite her suffering, she tried to remain happy. Why? Her aunts made sure her favorite toys, her beloved Lalaloopsy dolls, surrounded her. Kat passed away on July 22, 2015. She was only 5 years old.

Catherine’s father originally created the Kat D DIPG Fund at the Montreal Children’s that raises funds for DIPG research. It was a way to honour the memory of his lost child. It was also a way to raise awareness about the brain tumor that took his daughter’s life and collect funds to give new hope to children suffering from this terrible and fatal disease by supporting the work of renowned brain cancer researcher, Dr. Nada Jabado.

Dina’s nephew came up with the KAT D STRONG bracelets that the family wears and gives out at all their events.

Dina’s brother in law Perry took the foundation to a different level when he created Expos Fest, an annual charity fundraiser geared towards kids and fans of the Montreal Expos.

The family continues to fund raise so that one day there is hope when a family hears the word DIPG.

Congratulations to the Expos Fest family, whose 4th edition raised a record $166,704. Through the hard work of these passionate volunteers, they have now reach an impressive half-a-million-dollar milestone in just 4 years.

Since the start of their fundraising activities, $590,000 has been donated towards Dr. Nada Jabado’s brain cancer research.

Thank you for your dedication. Kat did not die in vain.

Your opinions are important to us. Whether it is a simple question or a valuable suggestion, we want to hear from you. You can reach us by filling out this form or email us directly.